A comic series on which  I am currently working.

This story takes many elements from the superhero and magical girls genres, mixed according to my taste. Despite its title, it is not that spooky and has an overall light-hearted tone.

The following chapters tell the adventures of Jana, an unlikely superhero who defends Prague and surroundings from a number of various threats and bizarre villains. 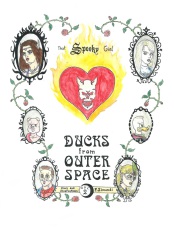 Even though the threat of the legendary creatures led by the goddess of winter is over, the heroes are facing serious troubles, as the government is cutting their public funds in favour of an outsourced private security service.
In this chaotic climate, villains and criminals are on the loose as never before.
And to make things even worse, a terrible and improbable menace from the depth of space is quickly approaching Earth.

Jana is finally committed to complete her application for becoming an official superhero, but she finds out that the situation has drastically changed in the recent months.

Meanwhile, the White Rabbit gang is once again planning something fishy ...

It seems to be a quiet evening for Jana, to the point that she agrees to help look for a lost cat. However, something dangerous from very far away is lurking in the shadows ...

Jana and her friend Hanka are having a regular evening out, but a fanatic obsessed with religion and morality is going to spread panic among the party-goers. However, a new hero is ready to make his appearence to save the day ...

4. Krásna a nebezpečná (Beautiful and Dangerous)

A dangerous villain is spreading panic at Náplavka with his flame-thrower, but luckily Jana is close by to face him. However, much greater dangers are awaiting our hero ...

While Jana and her brother are busy with daily matters at home, Lenka is planning to enjoy an evening at the National Theatre for opera. However, her night out will not turn out as quiet and pleasant as she expected ...

Whiskers Mask is fighting for his life against the Phantom of the Opera, who appears to be connected to the White Rabbit. Lenka is watching him struggle from the gallery, but she does not seem to have any intention to help.

Is that really the end for the feline defender of justice?

7. Zlato a stříbro (Gold and Silver)

After witnessing the powers of Golden Princess at the opera, Lenka has started following her in secret, in order to discover her secret identity and settle once and for all who is the real gold standard among Prague's magical girls ...

The fearsome battle between Golden Princess and Selene continues.

Which of the blonde magical girls will be the winner? The beloved superstar hero or the ruthless rogue?

Jana and Hanka are having a walk in the centre, which turns out less pleasant then expected.

When the Deadpan Circus assaults the National Bank, it is time for the heroes to intervene.

In the meantime, out in space, the Space Ducks seems to be ready to make their move ...

In the middle of what would have seemed to be a normal day, the gigantic spaceship of the Duck Empire appears upon Prague.

While chaos spreads across the streets all over the city, it is up to every hero to face the biggest threat they have ever faced ...

In order to face off the terrifying menace of the Space Ducks invasion, all the top heroes have been summoned to the headquarter of the Municipal Police to discuss a strategy to save their fellow citizens from the alien threat ...

The Space Ducks forces keep spreading terror and destruction across Prague, while all of the heroes are doing their very best to contain this unprecedented threat ...

Jana, Golden Princess and the other heroes keeps fighting back the Space Ducks invasion, finding much needed support from an ally. However, the alien invaders will stop at nothing in order to achieve their goal of wiping out any resistance ...

After boarding the main spaceship, both Jana and Lenka are battling the Space Ducks forces stationed inside, unaware that Captain Quaroq has still some aces upon his sleeves  ...

Inside the spaceship, Jana and Lenka continue their battle against the strongest members of the Space Ducks forces  ...

There is not time for the girls to rest after the fierce battle they just fought, as the giant spaceship is inexorably falling and will soon crash into the city. WIll the heroes be able to pull off one last miracle?