I have always loved comics and manga, from the stories with Disney characters (Mickey Mouse and the ducks of Carl Barks) to a variety of shonen and seinen series, going through some Italian crime and mystery stories and a few American superheroes issues.

Not happy with just reading them, since late childhood I have also tried to write and draw my own stories: from space operas with antropomorphic animals to James Bond inspired spy-action adventures, from my own unofficial Dragon Ball Z sequel to journey and battles among knights in a vague medieval setting.

Since 2016, I am regularly dedicating time and effort to create my own urban-fantasy universe, leading to the titles below. 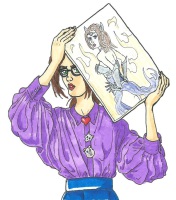 A comic series that takes many elements from the superhero and magical girls genres, mixed according to my fabulous taste. Despite its title, it is not that spooky and has an overall light-hearted tone.

The story tells the adventures of Jana and another bunch of unlikely superheroes who defend Prague from a number of various threats and bizarre villains.

Currently there are two completed seasons/arcs and one in progress: